Anxiety is hard. I know this from personal experience. In fact, the reason I decided to finally try floating, after wanting to experience it for well over a year, was because the foundation of the life I had created for myself fell out from under me, and my anxiety peaked as a result. During my very first float, I felt my heart rate slow for the first time in days. My mind settled. My thinking cleared. I had some big decisions to make, and I finally felt equipped to make them. Over three years later, I still use floating to manage the stress life throws at me. Over three years later, it still works.

Anxiety and Depression: The Big Picture

I know I’m not unique in that I sometimes struggle to engage with life in a calm manner. An estimated 42% of people will suffer from anxiety at some point in their lifetime, making it the 6th leading cause of disability in the world. The number one cause is depression, a condition approximately 30% of us will battle with. What’s more, half of us who experience one will also experience the other, and the vast majority of us (about 75%) will never receive treatment for it. That is a lot of suffering.

Of those who do seek treatment, most try therapy, pharmaceuticals, or both. These are amazing modalities for the people who see improvements with them, but only about half do. Thankfully, new options are emerging, and studies are being done to find out what works.

One such study came out this year on the effects of (you guessed it!) floating. The study took place at the Laureate Institute of Brain Research in Oklahoma. All 50 of the participants suffered from some form of anxiety, including generalized anxiety disorder, PTSD, social anxiety disorder, panic disorder, and agoraphobia. Of those, 46 of them had also been diagnosed with depression. Researchers wanted to see what the effect of one 60-minute float would have on a number of different factors, from anxiety and muscle tension to energy and contentedness. 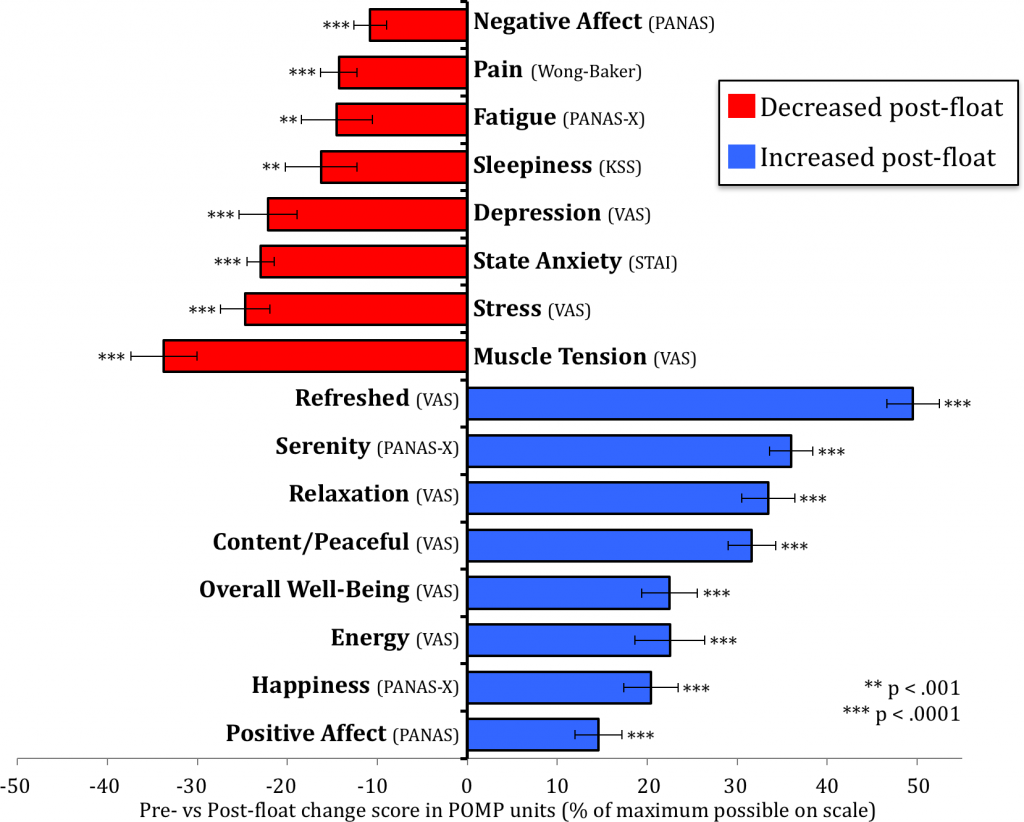 “While many find the prospect of being alone and doing nothing for even a short period of time to be aversive, the current results suggest that occasionally ‘disconnecting’ from technology and providing the nervous system with a respite from outside stimulation might actually be conducive for mental health.”

Don’t worry, I’m not going to regurgitate the entire study (Here’s the link to the study if you want to dig in yourself). Instead, I’d like to consider the reservations we hear the most about floating, and explore them within the context of how the participants felt about those same topics.

A lot of people are hesitant to even try floating. We get it. It’s new and it’s different. In this study, 15 of the participants rescheduled their floats last minute, and another 15 didn’t even show up (only those who actually floated are included in the sample size of 50). Let’s look at the ones who did decide to take the plunge.

A lot of people tell us they couldn’t make it an entire hour in a float tank with nothing to do. In the study, though, only two people didn't float  the full time. One got out due to having cuts on their back which the salt irritated, and the other did get out due to anxiousness. Of the 48 that survived the hour, though, 39 said the time was either just right or that they wanted to stay in longer. But for the 11 who wanted to get out but didn’t, was it worth it?

A lot of people don’t know how they’ll respond to floating. Will they like it? Will it be worth the time and money? Will it actually do all the things it claims? Well, for these 50 people, the answer seemed to be ‘yes’. Every one of them (even the ones who got out early) found the float drastically reduced their feelings of anxiety. In fact, 37 of them found it to be the most effective and relaxing treatment they had ever tried, including 82% of the participants with the worst symptoms. The other top benefits were a decrease in muscle tension and feelings of serenity and of being refreshed.

But Will it Work for ME?

We all have our unique situation, and floating isn’t for everyone, so the only way to really know is to come see us. The study found seemingly important factors such as sex, diagnosis, and medication status didn’t affect whether or not someone would benefit. We’ve found the same to be true at our center—we see people from all walks of life fall in love with floating. And you can take extra comfort knowing we do guarantee your experience, so don’t feel stress about throwing your money away if you don’t feel better after your float.

Interestingly, participants also reported seemingly neutral float experiences as positive ones. For example, floating can cause a feeling of detachment, a phenomenon that could be seen as good or bad, but everyone that experienced it saw it as a positive thing. Comments were made like, “At times I felt completely out of my body in a pleasant way” and “I felt detached from the world in a good way while floating, as if I was in a sanctuary.” Even hallucinations, a rare but possible occurrence, were seen as being positive. One participant described “visual lights and color, very pretty and relaxing.” Another said, “I saw little flashes of light like starbursts randomly in different places. It was beautiful.”

In a world where how we see things becomes our reality, the ability to see goodness where others see none is a rare and wonderful superpower.

If you're ready to try floating for yourself, click here.

Visit our library to learn more.